We are all getting older. That’s my opening gambit this month. It’s pretty broad so we could be going anywhere with it, but one thing I can guarantee you is that you are a tiny bit older now than you were when you began reading this a few moments ago. Momentous.

Nothing good comes of aging other than lower car insurance. I can’t think of anything else. Most of us put up a little fight against the goose step of time… mine revolves around regular cycling, regular broccoli, and regulating my cider intake. And it’s the regulation that I worry about… there’s too much of it. Too many people are aging their way into a downward spiral of regulating their movement repertoire. Not just the volume of movement, but also it’s intensity and it’s challenge. The inventiveness. The flare. The skill. New skills. They get left behind because of a belief in an underlying aging principle: “you cant teach an old dog new tricks”, particularly in terms of movement and exercise. But it’s a rubbish saying. Why would you teach an old dog new tricks? It knows all the tricks already. Forget new ones, just get a scooby snack out and remind it of an old one that you’ve both been neglecting… pretty soon owner and dog will be having fun again. I do it all day with my clients in the gym, although I try and choose the appropriate old trick, and I use a Tunnocks Caramel Wafer instead of a dog biscuit.

When we are training or rehabilitating our clients we are often challenging their movement “competence”. Some of our exercises should be presenting a puzzle, a “skill”, a shape to make, a way to lift, a footwork alternative. We could stretch it as far as saying we are doing some motor learning, or at least reminding. But what we come up against are folks who have put up their “exercise age barriers”. It’s not that they don’t want to meet these challenges, it’s just that they have been conditioned to believe they can’t. Which is annoying. Mainly because it can produce a road block to training progress, but also because they may have a point.

Don’t go Googling “does motor learning deteriorate with age”. Because I’ve done it for you. And it does. And you will find scary science such as the 2015 research article by Jie Ren et al called “The 50s Cliff: A decline in perceptuo-motor learning, not a deficit in visual motor perception.” Sorry Jie, you may be a really nice guy, but get stuffed. The only 50’s Cliff I know is Living Doll by Sir Cliff. I’m not going over your cliff without a fight. Which is my point. If I go over I want to do it Thelma and Louise style… it’s the quality of the fight that counts.

Movement is language. I am not really talking about the concept of  “Physical Literacy” here. I actually mean language. Speaking. Making word sounds. The spoken word sounds that you produce and hear are created entirely by movement. The diaphragm, the muscles of the larynx and throat, the tongue and the lips all work in defined movement patterns and sequences to distort a stream of airwaves into universally recognised sounds. Its not a multi-valve wind powered instrument, or some form of electrical resonation…  its just plain old movement doing its thing. And I bet you are very very good at it. Lets do an experiment to remind you how good. Let us sing.

The hymn I have chosen isn’t at random. In fact it is one line of “Jerusalem”. The line being “In England’s green and pleasant land” (here in all its glory). It has the right note cascade and pitch, and it is particularly easy to change it’s key.

I want you to sing it now. Go on, do it with conviction…. this is science.

Now I want you to sing it in a slightly higher key.

Now try it in a lower key… you may struggle a bit with “pleasant land”.

It went low didn’t it.

Surprise yourself? Pretty good weren’t you. The amazing thing is that once you started the song line, whatever key you were in, the rest seemed to follow naturally and you hit the notes. For many of you, you have just re-visited an old trick. The reason this happened is because you have one of these: 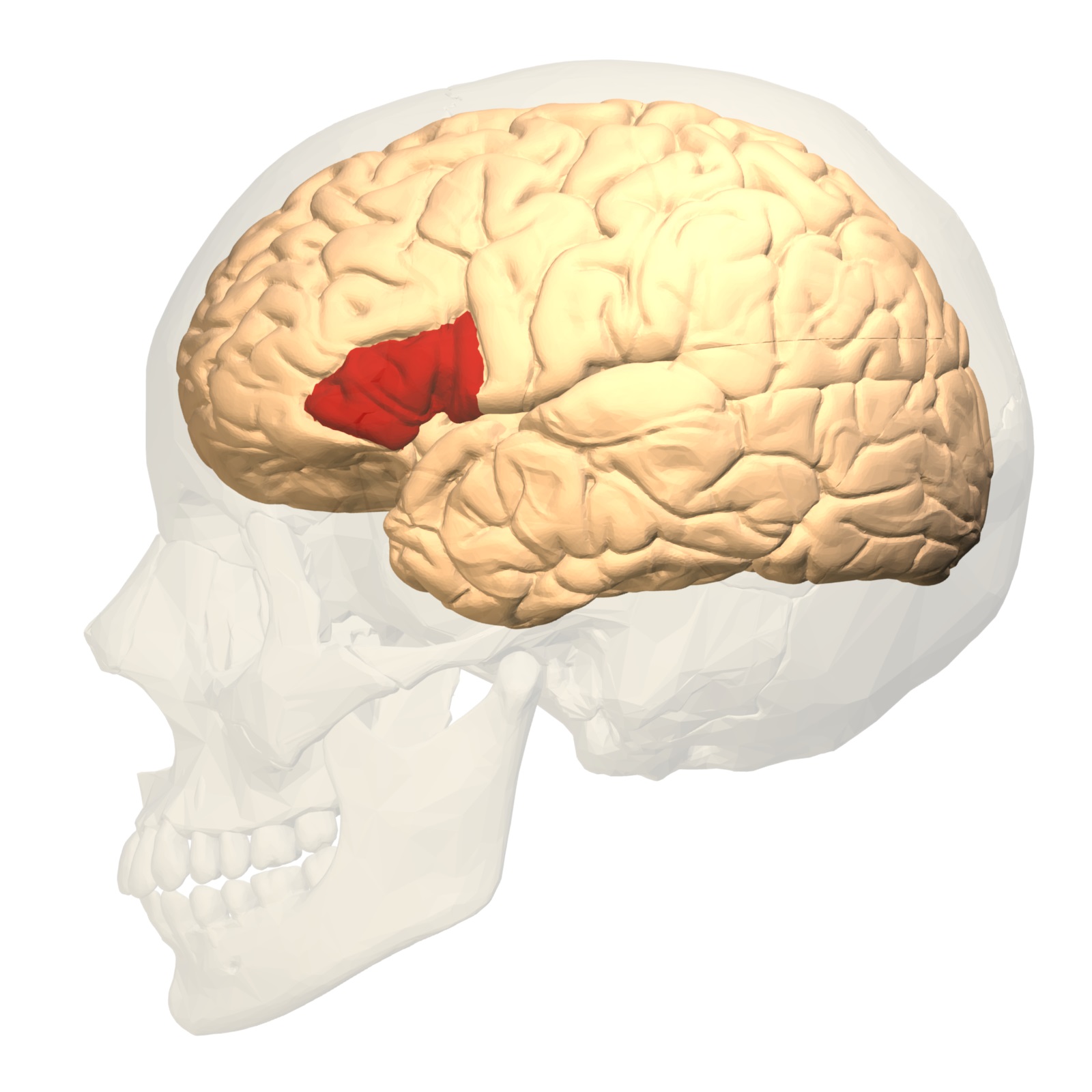 It’s called Broca’s Area in the brain, usually on the left side and near the front. It’s job is to control the motor functions involved with speech production. It’s a central processing unit for movement and it does it in a somewhat typical CPU way…. The hierarchical chunking of basic data. As a baby you learned primal sounds, some by chance and self experiment, but most by mimic. If you are a parent you may remember leaning into the cot feeding in those small segments of defined sound… ga ga, da da, ma ma, bub bub, etc. These are primal fundamental sounds that become the building blocks of more complex sound chains that we call words, and eventually sentences.  The early years process of turning the micro chunks into macro chunks is not without it’s hiccups. If we take the two monosyllabic  sounds “set” and “tee”, we find if we put them together in that order you get a macro chunk for something you sit on. But if you just simply get them the wrong way round, you get an altogether different macro chunk for something you pour a drink from. But with practice, and the true fuel of motor learning “repetition”,  we get it sorted out. So much so that we start to chain together words and sounds into typical phrases, and rhythms, and tones. Free speech and learned word chains wind around each other into language. Delivery styles are rehearsed and refined… whispering, shouting, deliberate, fast, singing, forceful and even sexy. Patterns, styles and technique are stored as individual motor programmes. And if you weren’t on a train I like to think you have just accessed a motor programme by doing our singing experiment. Most of you will have sung that line before (it’s data that you input into Broca’s Area from the ethereal depths of your brains memory centres). But you can sing it without making the sounds. Try that now… think it out loud and vigorously in your mind with all the note changes. There it is, you kind of heard it in your head! Interestingly if you really committed to it most of you will have done a little head or eye-lid/eyebrow lift as you hit the “eng” sound in England… movement has its predictable habits.

The whole process of the hymn line experiment was unthreatening, familiar, achievable and kind of nice to play around with your singing mojo again. Even though you may be a reader who has already fallen over the 50’s Cliff. But it was a motor learning tune-up and a movement experiment. You know… the deteriorating thing. This thing:

Its called the motor cortex and it is another central processing unit, but this time it controls your  body, limb and face movement. And its another chunker, pretty much exactly like our Broca’s area. As a child we become “literate” in movement via a process of learning and rehearsing fundamental movements, such as squats, lunges, pushing, pulling, reaching, rolling. We macro chunk these into gross body tasks such as running, jumping, landing, throwing, catching. Then we sequence and chain the macro chunks into more specific programmes such as triple jump, carving ski turn, fly fishing cast and nose-picking. We build a library of pre-rehearsed movement patterns that we can both consciously and sub-consciously access and adapt according to task, technique, environment and success. Exactly like we do with speech… and in our early years we can make the same experimental mistakes as the “tea-set and settee” conundrum. Throwing would be a classic example of that. To powerfully throw you load and then unload the arm and body, but if you forget to load, or start the unload early you just punt it out from the chest… easily done.

So why are we discussing this. Well in the paragraph above is an extremely important word. Its one that I worry about and work with all day. See if you can spot it. Don’t cheat and read on.

You get it? That’s the one… adapt. Or more precisely “adaptability”. Our movement adaptability is what makes us humans so relentlessly successful at doing stuff. Be that discuss throwing, to moon-landings, to plastering walls. We are movement masters. We may become specialists in one area, but we can only do that because we are all underpinned by  an enormous generalist repertoire of movement capability… every one of us. And the day you turn 50 you don’t have to pitch up at the boffins cliff and start chucking your chunks over it. You don’t have to retire to the dog basket. You should do the opposite. And the reason is that “deterioration” is real, the scientists are right, but it’s a typical double edged statistical sword. Say I am over 50 (alright I am), and say I have had a decline of my whole motor capability by 10%. That leaves 90% of my magnificence left. That’s a whole lot of ability left in the tank. And when ability meets adaptability then the movement magic can happen.

As trainers and therapists (and athletes)  we must not turn our backs upon adaptability due to common misconceptions and attitudes towards age. We must re-visit the old movement tricks, re-invigorate them, and use our skills to re-engineer them if needed. We must not fall into the habit of practicing what we can already do. That’s just stale maintenance.

So how do you do it. Well you Tunnock people. Those of you who enjoyed our singing exercise have all been Tunnocked. Trust me I know nothing about pitch, tone, keys and note cascades… I made all that up because I needed a “hook”. But I do know about facilitating movement. And to do that with folks who have been socially nurtured into movement caution you sometimes need that hook. In the gym it should be a safe and appropriate physical challenge that surfs the boundaries of the clients current competence. It’s there where the old tricks can be found and where you find the spark of adaptability. You need to wave the wafer.

Messy
Should you roll with it?