Stuart Armstrong’s excellent blog article “why coaches like drills and how they are killing creativity” can be found here.  It is bang on the money. A message that needs to be heard, and you could opt to read it before this. My favourite line is:

“Imagine a world where trying new things was applauded rather then met by side of the mouth whispers by arm folded tracksuits on the sideline.” I’ve seen a lot of that.

Now I know Stuart and he sees the bigger picture, but he likes poking people with thinking sticks, which is a good thing. In this blog he is playing advocate for “Creativity”. It’s like an episode of courtroom drama Suits and Stuart has slicked back his hair, pulled on something sharp, and is taking on the giant corporate coaching mantra of “repeatable predictable automaticity”, or in short the drill. So it’s quite a brave move and rattled my cage enough to write this repost.

In the blog Prof Kauffman describes these incidents of creativity as being “original, meaningful and surprising”.  He’s giving the loose and unpredictable nature of creativity some structure. He describes the creative incident as going beyond the standard repertoire and transcending expertise. And the very appearance of the creative incident is a surprise “not only to oneself but to everyone”. A surprise! It’s not often you hear the proffs talk about those… they generally don’t like or take to surprises… it’s not what we pay them for. The problem is that you do get a lot of surprises in sport. Thankfully.  I tend to ask my students to steer clear of too much logic and cold reasoning when it comes to thinking about sport. In fact I encourage them to apply and accept some “messy thinking”. That way they might find some sense.

So in the lawsuit we have “freewheeling creativity” on one side, and “predictable automaticity” on the other. Could be a sticky and long case. I thinks it’s best we settle out of court. Here’s why.

Let’s present some messy thinking arguments. Here’s one you will all be familiar with. It’s anecdotal. Anyone who knows me knows that I rate myself as a table tennis player. Anyone who’s played me may find otherwise. Anyway down the village club during the knock up I often find myself attempting and sometimes achieving creative incidents. I have a good knock up mentality… I just loosen my goose and let it happen. Wild slamming looping forehands off the wrong stance whilst pinned up against the wall are pulled off. I honestly don’t know how I do it (which is a good title for a sports psychology book). It is certainly a surprise to me and by the swear words a surprise to my opponents. And then the dreaded phrase is uttered; “are you ready?”.  The match proper commences and I play in earnest… far too earnestly to allow the goose out. Safe backhands, chop returns, keep it in play, trust what I know works and what I feel I am reliably capable of. If its enough I may scrape a win, but infrequently. The messy thinking phrase here is “reliably capable off”.  What I am capable of is knock up magnificence, but it is shackled by my current level and perception of competitive competence. Messy.

Lets try a contribution from an expert in the field of creativity… Michael Jordan. He was outstanding and undeniably creative  in his approach to his sport and the basket. I remember a press interview during his peak when a reporter asked a simple question… “how come you are so much better than the other guys”. Jordan took quite a long moment and gave an equally simple answer… “its because I do the basics better than anyone else”. I don’t know whether he came up with it, but I’ve heard it used an awful lot since. It’s a different kind of a surprise when a mercurial creativity merchant such as Jordan credits his mastery of the basics as his cornerstone. Messy. 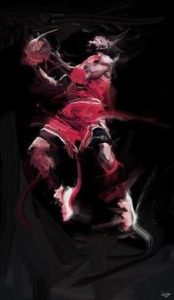 We could look at a move. Let’s take the Cruyff Turn. Surely one of the most recognisable creative incidents within sporting history… an I was there moment of genius. I found it described in the book “Sports Around the World: History, Culture and Practice”:

“He pioneered a move which has been dubbed the Cruyff Turn in which he looked as if he was moving to pass the ball but instead dragged the ball behind his planted foot leaving the defender off balance.” Perfect, I can see it, and anything pioneering must be scoring very high on the creativity scale.  But then there’s the next sentence: “This move is commonly taught to young soccer players around the world”. That’s gone and messed me up. The most famous incident of football creativity has become a drill. So is the creative incident only creative once, and then it becomes common practice via deliberate technical  practice… reduced to a drill skill?

I’m getting proper messy now. Is the creativity expressed as an incident or is it really an attitude. Is the creativity a skill itself, or the willingness to attempt to use that skill. Are there actually any new skills, or are there new ways to use established ones. The latter would really mess the court case up.

Stuart’s blog lists some of his own favourite sporting “new moves” and describes them as “techniques created by these great players as solutions to problems that are presented by changes to the rules, changes to equipment or changes to the nature of the way the game is played in order to find a technical advantage.” He goes on to describe this as “creative endeavour”. I like that… he’s straightened up my mess a good deal.

So how do they do that? Quite clearly it’s because they can… but that isn’t an acceptable answer. I can pull off occasional ping pong miracles, but never genuinely appropriately, when it matters, reliably, accurately, under pressure, or as successfully as these great players and their moves. The astute will have just noticed I used the word “reliably” whilst describing creativity. Council for the defence would be objecting. But I think it’s appropriate. I’m a movement man. I want my athletes to be creative, but I need them to be reliable. They need to stay athletes for a long time, not just have moments. But they will be playing other athletes who may be equally well prepared. So they need to be more reliable and have more moments. Jordan was probably right. What underpinned his proliferation of creative moments was his own homage to his foundation of basic reliable skills. We could argue that these are fundamental movement patterns, acquired technical competency or rehearsed higher level game specifics… it doesn’t matter, they are basics. Somehow they were honed. Freestyle or guided. Definitely repeated. Always revisited. The basics are the foundations that allow him to express his creativity… and his basics were better than yours. Even if they weren’t he believed they were and he was gonna get creative on your arse anyway. See how this works… it’s messy.

So if this is a repost then do I think that the drills are killing creativity? They are if coaches let them. However I don’t think we should pitch the drills against creativity. We need to keep them out of the divorce court and they need to learn to live together. The drills are the strength in this relationship, the creativity is the spark. And you simply won’t get one without the other. If the relationship gets stale then it’s easier to just press on with over familiar unimaginative drills… you get my analogy.  It’s a shame but sport will never be about the glorious chaos of unbridled creativity. But pushing the boundaries of performance and technique means that you do have to unbridle the young athletes regularly. Every training session should have it’s “licence to thrill” moments.  But we shouldn’t throw all the drills out. It’s just that if a “surprise” pops up during a drill coaches should sometimes go with it, encourage it, learn to expect and even facilitate it… whether it’s a success or not. You never know it could be the next Fosbury Flop, or you could be watching the next Messi.

I have worked with Stuart on a number of projects over the years and he is all about practical advice, resources and workshops concerning talent development for coaches, teachers, parents, and of course young athletes. You can contact him via his website found here at www.thetalentequation.co.uk

Some Foam Truths
Waving the Wafer