This is my blog and I am trying to make sure I am providing useful information and not blether. So this edition is going to showcase a unique piece of research I did last year, although it is entirely anecdotal, non “scientific”, has a small cohort number, and won’t include many tables or flow charts (there is a graph)… and to be honest is poorly referenced. Sorry… it also lacks an “instant expert” abstract, although could certainly be described as abstract. I am going to present it mainly in abbreviated notes form to help you get to the end quickly, and to keep things consistent I am also going to present it in a non standardised format.

To rid the world of Plantar Fasciitis, cos it’s proper miserable.

Me treating four blokes over a number of weeks, possibly months.

4 men of a similar middling age.

A cyclist buddy of mine, a bloke I use to play village football with and should have retired by now, a proper paying client who stuck with me…. and me.

Pretty fit lads to be fair, and I’d say above average motivation levels… and all had plantar fasciitis (PF) in one foot over a “fairly lengthy” duration and significant enough to seek some intervention from me at pretty much the same time last summer. So a handy co-incidence and an opportunity to implement a piece of significant research.

None of us had any previous history of PF. No scans between us. No Rheumatoid or systemic issues of note. 4 normal fellas really.

Diagnosed by me as PF… see later for more specifics. And when I say fasciitis I could in fact widen that a bit.

1 may have been an “itis”… which is roughly looked upon as being of mainly inflammatory origin.

1 may have been an “osis” … which is more of your micro-structural long term mechanical stress reaction. Ref: Running Fitness magazine,May, 2015

1 may have been an “esis” … which is a useful joker, and can be played when the two above don’t quite fit the bill, or is a combination of the two above, which is another out really.

The other one was definitely one of the three above.

Ref: yeah I know, Running Fitness magazine! Proper full on article delineating between tendonitis and tendonosis. Pretty spot on read to be fair, but I was thinking a wee tad of information overload for your average runner. I mean I went to a tendon conference this year and the boffs were still debating about the “osis, itis, esis” conundrum but they better get on it because it’s old news on the WH Smith middle shelf right now.

All four feet hurt though, with a good smattering of “worse in the morning”, “pebble under my arch”, “sharp on sprint”, “better on watching telly” subjective contributions. And to a man all four had just cracked on and hadn’t really done anything of note to attend to the issue at foot.

A standardised intervention protocol was applied to the cohort.

Which basically means that I had the good fortune to blag a shockwave ultrasound therapy machine on loan for 6 weeks, and wanted to test it on some folks in my practice, and our limpy little group provided an ideal opportunity. As you may know Extra-Corporeal Shockwave Therapy (EST) is a more punchy, bigger hitting and significantly more expensive version of ultrasound that comes with bigger machines, often on wheels. It’s been around a while to be fair, and claims to have some serious benefits…take this quote:

Anyone who knows anything about the EST revolution will know that it is inextricably linked with Plantar Fasciitis… it’s the gold standard according to a lot of specialist foot clinics, and other people who have bought the machines. Our feet were prime candidates for some EST love, and I initiated a group intervention. Now I am not daft, so I stuck to an advised protocol, had some pretty regular access to the lads, and of course relatively uninterrupted access to my own foot. I am not going to say that I didn’t fiddle about with the odd exercise and bit of advice during the “intervention”, cos I may have… after all these were human beings and not guinea pigs. But the main thrust of my treatment was delivered via the EST device.

It went back to its owner after 6 weeks and I reconvened the lad’s feet for a thorough de-brief. The conclusion… not much joy if I am honest. All four of us still had our PF, with may be a bit of movement up and down in intensity levels, but still troubling us. Football guy’s was worse, which he attributed to the mystery voodoo medical machine and not the fact that he was charging around in 10 year old fossilised football boots on concrete end of season pitches. Personally I did feel that immediately after an EST treatment that my foot felt a lot less sore, but by later that day it seemed about the same.

OK, lets be honest, my standardised intervention probably wouldn’t stand up to a PhD defence, but as an anecdotal field trial in a real world environment, it was a reasonable effort.

I was hoping that at this stage the study would be over, but in real terms I was left with 3 grumpy men still in pain, and was also hobbling a bit myself. I felt obliged to swing into action. I would like to say that I applied my own ground breaking protocol, but it’s probably best that I summarise each.

Cycling Buddy: Easiest of the bunch really. He had a couple of sessions of plantar massage, bit of G5 vibro work, even some normal US, and to my surprise it seemed to work a treat. I got him on a programme of plantar/calf stretches…  see later. He also changed his work shoes, and we slammed in an off the shelf soft orthotic (Sole Control version).  Very standard and relatively old school stuff. He seemed to do well in about 5 weeks.

Paying Customer Guy: Did some local stuff that didn’t seem to work too well. However he turned out to be the arch nemesis of private practitioners…. a real nice guy from the next village. So he, and his recently purchased bike, got invited to join in with me and the boys for a bit of lycra action on our regular rides. He is a good standard competitive runner, training regularly on the roads… and our emphasis was, as they say at every conference, to “de-load” him. It worked a treat, and the cycling filled his gaps. We then “re-loaded” him in progressive increments at the back end of last year, along with some fairly uncomplicated running gait re-ed/technique mill sessions, and he is doing well. 6 month job though. He also rather annoyingly crossed the threshold of client to mate so gets his treatment free…

Football Bloke: Useless. Didn’t commit to the exercises etc. Needed to play his end of season cup games… so I taped him. Nothing kinetic or brightly coloured, just a solid zinc oxide stirrup spring technique before each match. Got him through OK. After his season ended I tried some therapy moves on him and even lent him a fore foot stretching block. No joy. He then started to get a lot of inflammatory type pain during the day… office job. Decision was made to send him to a podiatrist colleague and he had a H/C injection. Definitely helped quite a lot. He’s not cured and he may be a candidate for another at time of writing.

Me: Persistent. Tended to go more for some stress-shear type techniques. Basically that’s plantar stretching but the jury is out on whether it can actually stretch. I tend to agree and favour that the benefits are more along the lines of “collagen cascade”, re-modelling, eccentric type tenocyte down regulation. Phew.

I like raised fore foot controlled step throughs, supinated wedge drop downs off a step, and posterior step backs rolling the heel down very slowly (pin in the heel jobbies). Longish and slowish and short of any pain if possible. From my own foots perspective I am pretty sold on the idea it liked me doing them quite aggressively and very last thing at night before chucking myself in bed… like next to the bed, then in. When I started doing those it did seem to improve quicker, and it’s doing well. To be fair I got the other three lads doing these “stretches”.

I gotta also admit that when mine was most sore I did put one of those blue Theraband  grip bars into the freezer and give my sole a good roll. Interestingly though I found that instead of rolling if I applied a slow and steady bodyweight force into the bar, with no movement, long pushes, I may have got some benefit… I guess along the same lines as the stress-shear remodelling stretches.

Here is a graphical representation of this studies primary outcomes: 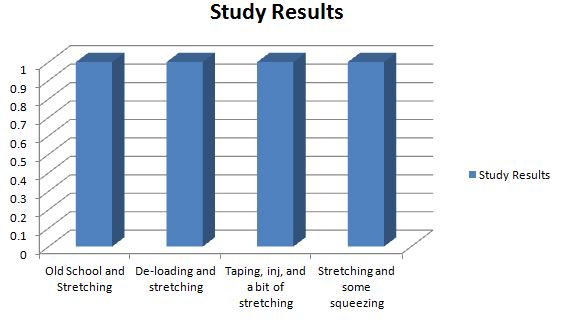 The graph effectively highlights that there is a consistent trend in modalities… i.e. stretching. Although the author reserves the right to consider this might be a bit of an anomaly. And, as mentioned, it might not be “stretching” anyway.

I don’t mean ethics here… what is the moral behind this story (research)?

It’s a simple one really. Injury management is not a “one size fits all” process. In my own study here the “one size” aspect didn’t fit, so I went on to try “multiple sizes” and found out where they fitted. Four feet, four different approaches, but modified to fit each foot owners responses and lifestyles. Some old school techniques, some more contemporary, may be a couple of calls that in general I am trying to move away from, and I am not claiming the “cure” card, but we got there. I guess the moral is… be guided by reasoning and clinical judgement, but don’t be frightened to use all your tools.

Bob will be presenting this study at “Chiro-Art 2015… where medicine meets mindfulness” at Shotley Working Mens Club in June.

The F Word
I Love My Trainers