I watch a lot of warm ups and I do a few myself, or with groups, or write about them, or even research them. They are everywhere. In magazines, on posters, there are probably many hundreds of thousands of them on Youtube… including a few of my own efforts. And they are without doubt… The Law. If you don’t do a warm up and you sustain an injury doing the thing you should have warmed up for then someone will almost certainly remind you that you “didn’t warm up properly”… unless that is you are a professional footballer who was “injured in the warm-up”. The Law also states that if you are on your own then you are responsible for your own warm up, or lack of it. If you are essentially on your own but are in full view of others, then you are still responsible for your own warm up, and it is tempting to make it look quite flamboyant. However if you are in a group then The Law states that someone else is most likely to “take the warm up”… kind of like you take holy communion, but with more grunting. The latter is almost certainly where habits are formed… which is good… and bad.

Now I am not going to be drawn into a rant about the merits and modes of the ideal warm up… go to any WH Smith middle shelf fitness magazine for that one. But I am going to go off on one about one thing and one sport, so be warned. Below is some evidence that I researched some “evidence”.

To be fair, Prof Google comes up with a smattering of decent advice on the first page. There’s some sound articles and a decent video choice, and if you read the first ten then you’d get a fairly good grounding of what may constitute an effective running warm up. But 4 of the top ten also refer to my gripe… that’s the way with the Prof, you get the good, and the bad.

I get to watch a lot of athletics (track and field) training sessions and competitions, so I get to watch a lot of individual and group warm ups, and you may have guessed that is where I see something I call the “Bad Robot”. It is almost universal, which worries me, because either I am totally wrong about it and it is utterly brilliant and entirely appropriate… or it is gumph. Thankfully sport has a long history of its “accepted wisdoms” turning out to be based on gumphy reasoning and group hysteria. Running has an abnormally high gumph factor… most runners wouldn’t argue with that.

So to narrow this down, the Bad Robot is actually a specific move that appears frequently in pre running/event warm ups and I would describe it like this:

Its a robotic long lunge with low rear knee and some form of marchy punchy arm action bolted on. There is a version with a mechanical looking torso twist, once down. Or another with an overhead arm reach, once down. You go down, there is usually a pause, then you go up, sometimes you go up with a high knee lift, and a bit more pausing. It’s also a game face exercise; no smiling, concentrate, not that you are likely to get it wrong, but this is serious “movement prep” and not to be taken lightly.

At athletics competitions girls will do this move more diligently than boys… like most things. You will also see serious athletes strutting this move in front of their opposition… like a war dance. Occasionally there are mass outbreaks of it, usually pre-event, all around the track perimeter… like a spontaneous funky chicken competition.

I don’t blame the athletes because they have usually been coached to do it at some stage. And I don’t blame the coaches because their resources and education programmes pedal the robot to them. I do worry though when down the back straight I see girls lined up on the lanes pounding this out. They are surrounded by peers and images that force feed them the robot:

The message is clear. This is preparation for running fast. This is a warm up with purpose, precision and practiced. In some cases this magic move will also have come with some impressive language. It will be described as a pre-facilitation, or a neuro-muscular recruitment, or engaging your triple extensors. Do this and you will run better. May be like this: 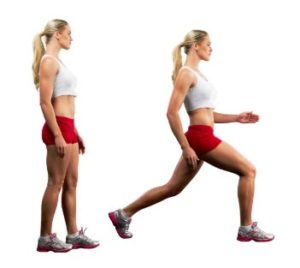 Personally I hope not. The last time I saw someone run like that it was the nasty fluid metal machine man in Terminator 2 … a proper bad robot. The problem is not the language, and not the exercise. It’s not the what. It’s not the why. It’s the WHEN. This is specifically being done shortly before running with the sole intention of supporting and potentially improving the soon to follow running performance. Which it won’t do. It’s not the robots fault. The robot was quite happy being a strength and stability exercise before it got hijacked and turned bad by the warm up merchants.

For me the movements that you incorporate into a warm up for a specific activity like running need to reflect the nature of running itself. Rhythmical not robotic; fluent and not full of pauses; loose and not rigid; rapid “bouncy” loading and unloading and not forceful ascending and descending; swap stance, hop and skip and not prolonged two footed split stance; the correct timing, rather than contrived timing; appropriate joint ranges and torques rather than exaggerated ones… and importantly, a gradual build up of forces and intensities rather than a sudden exposure to what is essentially a relatively high demand bodyweight strength exercise. A body that has been constrained and commuting all day needs to be re-introduced to its own elasticity, spring, rebound, force absorption and rhythm. It’s time to loosen your goose. The robot can’t do this, it’s not a bad exercise, it’s just a bad choice.

I know what your thinking… “but surely I need to switch on my glutes”. I have a simple way of switching on glutes with my athletes. I ask them to turn round. I kick them really hard in one glute. I then turn around myself and run really hard. If they catch me, their glutes are switched on.

A few of you might be thinking that the robot is part of your neuro-muscular activation sequence within the commonly quoted 3 phase warm up: Neuro Muscular Activation – Dynamic Mobility – Cardio Vascular Elevation. The deal here is that you might be right. What I mean is that folks a lot smarter than me are debating and researching this right now and the general consensus amongst these academically badged up boffins is a resounding “we don’t know yet”. It’s a difficult one with other slightly less believable folks committed to their own theories and allegiances. Some claim that sticking your thumb in a muscle will activate it (and as a trainer will teach you how to do it to others at great expense), some will have you doing a specific type of contraction for a specific period of time in a specified position (illustrated in their book). From my own perspective I find that stumbling upon a bear on the loose will always fully activate my muscles.

After all is said and not quite done… I do love a lunge, even robot style. It’s a great training and screening tool. You might want to look at a pair of articles I have written, one primarily on the lunge as a screening tool imaginatively titled The Lunge One , and its partner an article primarily on using the lunge as a progressive training tool, cunningly titled The Lunge Two .

It’s a classic “strength” pattern that lends itself to progressive overload and then extending it’s ranges of contributing movement. In general you’ll be after some adaptation after using it, with an end product revolving around a bit of muscular physiological high jinks that eventually increases your strength, it also offers some motor skills training that will take advantage of this new strength, and some potential improvement in your lumbo-pelvic stability and control at end range. All good stuff and resulting in the same short term effect… a sore arse.

Here’s some people getting sore in a car park, and another sharing her soreness with a crowd… both are examples of Cross Fit soreness, which is both trademarked and more Hollywood than normal soreness. 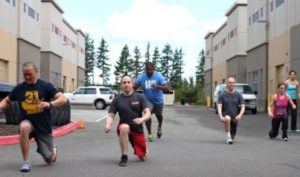 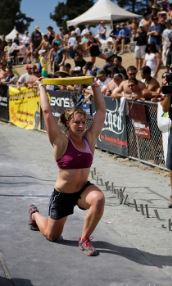 And I guess that is my big gripe. If you do the Bad Robot at the right time and with the right loads and intensities then it becomes a mighty fine robot. But it comes at a price. The post exercise adaptation process comes with some associated micro trauma, tendo-muscular junction shearing stress, DOMS, and the odd noxious chemical. The first two of these are present straight away. The other two come as a nice surprise the next day… many of you will have shared that pleasure with your hamstrings after a session on the robot. But the body can positively adapt which is the underlying principle of good training. Done progressively and done right it will make you a stronger and a more resilient unit… and then the Bad Robot can help make you become a better runner. But it’s not really stuff that you want to be meddling around with 15 minutes prior to running like a gazelle though. It doesn’t contribute much to that, and in fact if you end up robot lunging the whole back straight like many of the young athletes I observe then it could be counter-productive. Wrong moves, wrong energy system, wrong short term results. And also time wasted, when you could have spent it bouncing about a bit more, dropping those shoulders, getting skippy and pinging off the ground.

The good news is that I am not the only one who is on to this. Coach Support Card Set 5 in UK Athletics “365” coach education pack takes on the long lunge and progresses it as a “Dynamic Balance with Upper/Lower Limb Coordination” exercise… which is fair enough. And even better this coaching card is within the Physical Conditioning for athletics section, and no mention is made of it being a warm up. That’s progress, and that’s how we get rid of inappropriate but accepted wisdoms (gumph).

“Doing stuff cos everyone else is doing it” is one of the major road blocks to athletic preparation that I see in my work, and the real message behind this blog post. I know it seems like we have to turn our back on an old friend/robot, but he’s bad and that’s the truth. If you see him down the track, or at the local Park Run muscling in on someone’s warm up… then have a word.

Limp Over The Line
I Have A Syndrome