The Language of Golf

Home / Uncategorized / The Language of Golf

The Language of Golf

Most sports have their own languages. Football has its “nutmegs” and cricket has its “googlies”. Horses jump over “Oxers” and gymnasts jump over “Horses”. US sports commentators speak an entirely different language to any other human, as does Robbie Savage. This is the way of all sports… and none more so than Golf. In fact golf is perhaps the most quotable and quote friendly sport of all… Mark Twain, Gerald Ford, Winston Churchill have all had a famous punt… and about 200 examples from Lee Trevino are documented.

But are they true? Does the language of golf stand up? It is a question that with extensive research and experimentation I have thoroughly investigated for you.

I then went on to select some of the most common to unravel further with some surprising results.

What would it be like to really play an eight footer on a billiard table… how scary quick would that be. Even thinking about that liquid flat green baize gives me the yips. Next time you are down the snooker hall and Big Ron the owner is not looking, kick your shoes off and hop on up. Or don’t bother because you can actually buy a snooker putting green game that is quite clearly huge fun for all the family. No joke. I won’t post a link to them in case they get snowed under with orders… but here it is: 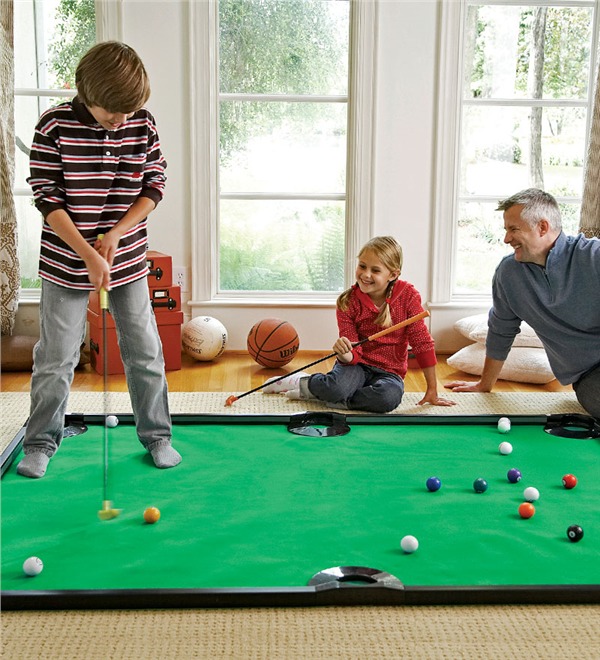 To be honest if you are going to do it then as Tiger would say… “Just Do It”. 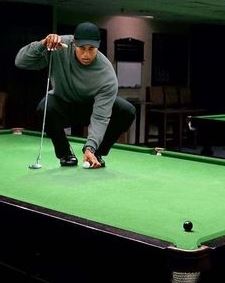 Often used to preempt a poor bunker shot…a sort of get out of jail free card before you skin it across the green. But what is it really like to hit out of a concrete bunker. I don’t know of any, and couldn’t find anyone who had decided to build one. Some municipal range mats are pretty close, and I have had a clip or two off a paving slab with a car boot wedge. So we best leave it to Phil Michelson to show us how its done… he can’t resist taking on a shot.

This one really takes on the same subject matter as our first, and you probably see a pattern here. “In play” golf sayings are really all about “get outs”. They are an expression of the mental jousting between confidence and ability that occurs in the players mindset during every round. The saying and the language help to trivialize the problem and justify a failed solution. I mean why would you ever play golf on ice?

Lets look at some of the more philosophical and humorous quotes. John Willis is first credited with this one:

I’ve certainly lost a lot of new ones. Golf balls are spooky. You would never lose one in your house… you can lose your car keys, or your phone… but not golf balls. There is always one on a shelf, or in the fruit bowl, or a few in the battery draw. If you are a golfer and reading this in your own home then I can guarantee that you will be able to find one within 15 seconds of reading this sentence. But out on the course… no chance. Brand new virgin Titleist, box fresh and slippery… spank it just 2 yards off the first fairway cut… gone…. no matter how many times you say “its got to be here somewhere”. Unless, that is, it is one of these: 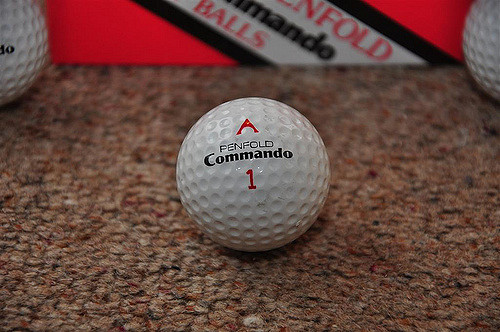 Above is a fine example of a Penfold Commando. This one is brand new… or it was 30 years ago… but it still has that slightly “tired” look about it. It is not without the first of many blemishes it is going to collect before it finds it’s way into the spare wheel well of your car, where it will occasionally rattle about cunningly mimicking a worn shock absorber, or just annoying the hell out of you. You cannot lose a Penfold Commando. You can purposefully smack one into the bushes on your local course just out of spite, but trust me, next time you are caught short and need some on-course relief, if you pop into those bushes you will definitely tread on the Commando. That’s the thing… if you find a ball on the course, nine times out of ten it is a dog chewed Commando and not an un-molested ProV 1.

But hang on a minute. Are we doing the plucky Penfold a dis-service? What do you really know about the soft skinned scabby old survivor lurking at the bottom of your trolley bag. Well in it’s day it was a revolutionary ball, first as a bleached white hardened version of Gutta Percha, and then as a uniquely latticed elastic wound thread ball, and was coveted by the professionals of the time. And all this was down to Albert Earnest Penfold. He was initially employed by Dunlop in 1919 and was responsible for the design of perhaps the most famous ball of all time… the Maxfli. He left them in 1927 to set up his own company, and the rest is history. Unfortunately for A.E. Penfold, it was a history cut short in 1941 when he was lost at sea after the MV Siamese Prince was torpedoed and sunk by a German U-boat. Thankfully his legacy lives on, probably down the back of your fridge freezer.

“Play it as it lies”

Really a fundamental dictate of golf, and actually Rule 13. So historically that means exactly what it says. Up trees, in rivers, clinging to cliff faces and embedded within a cactus… all of these have been played surprisingly frequently in pro golf. But rules are there to be stretched, and Big John has never been one to worry too much about rules. He likes to construct his own lie, and is quite happy to secure this with the help of a mate firmly restraining the young “volunteers” twitching legs. Thankfully he “tees it high and lets it fly” and rest assured that is a Commando heading towards those woods.

“Golf is a sport for white men dressed as black pimps”, Tiger Woods

Golf… that most formal of sports. With it’s long sock and tailored short heritage, and attitudes tucked up as tight as your shirt must be. You’d think it was a sartorial sanctuary of conservative tastes… but no way. Men are the main offenders. Yves St Laurent said that the sixth sense is dress, but men loose any vestige of this as soon as they become golfers. And it is not a recent trend. The jumper being worn by Doug Sanders below is extraordinary. It is bright mustard with a V neck that becomes a sort of pharoah neck and is complimented by a super roll neck… so three necks going on in one. Half mast dark mustard slacks reveal a cheeky hint of yet more mustard socks. Where is that jumper now? I would love to own it. Frame it. 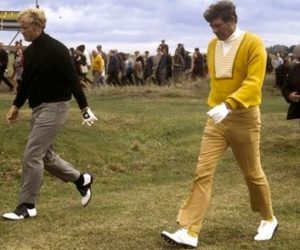 If anything things have worsened over the years. Particularly in the knitwear department throughout the 80’s and 90’s, and the early shell fabric disasters through the millennium. To honest talent and taste are not natural bed fellows in many sports. Who can forget David Beckham in a dress, Nigel Mansells tweed cap, or Chris Eubank’s Lord of the Manor look. But gold lamy and golf? Nah… surely not. A step too far. That would never happen. 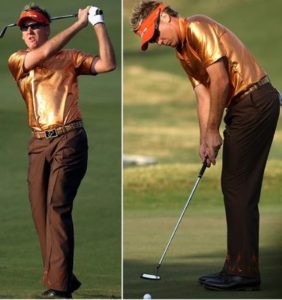 And so we return to Big John. When he first came on the scene as a wildcard wild hitting major winner he was equally as badly dressed as everybody else on tour. At what stage in his career, or “journey”, did he decide to become the worst dressed man on the planet is unclear… may be gambling away $60 mill and four failed marriages can do that to a man. To be honest though, I love Johns look. If your going to do it… commit, be bold, express yourself… and keep sticking it to the establishment. When every other pro is banking a cheque for turning the fairways into corporate catwalks, John is still ripping it, and ripping them. 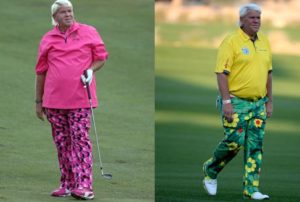 But what if we completely cast aside the over-marketed and priced golf clothing options all together. I am not talking an enforced uniform kit like Wimbledon, or Lawn Bowls here. I am talking nudism.

“It’s the most fun I’ve had with my clothes on”,  Lee Trevino

There is nothing more liberating than a bit of nudism/naturism/German holiday day wear. Surely golf has got to be more fun with no clothes on. Really feeling where that breeze is coming from, nothing bunching under your armpits on the backswing, no belt digging in after the 9th hole refreshments, grass under your bare feet… just swinging free and jiggly. Free from constraint… just man and ball. You’d think it would be really popular. For research purposes I wanted to try it but could find only two places in the world where nudist golf is played: Cyprus Cove Resort in the US, and La Jenny Golf Course in France. That’s the first hole at La Jenny below, and however you look at it, it does look kind of refreshing. 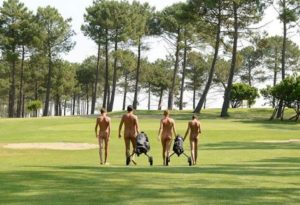 I was going to provide some useful Youtube footage/evidence showcasing the benefits of natural golf, but my Google search terms took a surprising turn for the worse and ended up revealing more than I expected.

So it turns out that the language of golf does stand up to scrutiny. It is truthful, informative, playful and colourful. New terms will come along… one day you may look in the mirror and admit “I’ve Poultered myself”. Faced with a tricky little uphill chip onto a green your playing partner may comment, “Don’t leave it in the Winkleman” (Fringe). Or you may find the rough being described as “a bit Trumpy” (Long wispy fine grass that snags and turns your club over). But trust me the old sayings will hang around as long as a Penfold in your compost heap.

The Magnificent Seven
Kylie and Weddings